This week I though I’d share with you a very special reunion I’ve had recently.

I grew up in a country town in Australia, which was not very multicultural. But our high school had a sister school in Japan. When I was in Year 9, a group from that school visited us for 3 weeks and I hosted one of the girls. I remember it being lots of fun exchanging cultural information, as she taught me origami, Japanese (which sadly I never continued with) and I taught her about Aussie life.
As was quite common in the days before the internet was common use, we lost touch. But a few years ago she found me on Facebook. And this year she sent me a message to say that she was coming to Australia for about 12 months, on a working holiday visa.
So of course, we had to catch up. Coincidentally, she ended up living in a suburb very close to mine!
It was such a special reunion on so many levels-we had lots of fun reminiscing about her exchange 12 years ago. I think it is amazing that we can rekindle a friendship after so long!
For all the negative things said about Facebook and globalisation, reunions like this are definitely the best thing about the world growing smaller 🙂 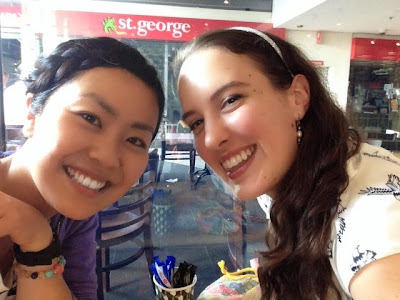 Hosting – one of the fam or treated like a king?